A part from a great number of clinical and laboratory changes and disorders, the Aacute phase response to every tissue injury is characterized by changes in proteins concentration in plasma. These proteins are called acute-phase proteins. Some of them decrease as albumin and transferring while other increase like C-reactive protein, amyloid A, ceruloplasmin, haptoglobin, AGP, fibrinogen and ferritin. They are part of the innate immune response and most of them are glucoproteins. They are mostly synthesized in hepatocytes under the effect of cytocinines, although there is strong evidence that their synthesis takes place in other tissues too.

The rapid and accurate definition of acute phase proteins reveals the existence of infection or inflammation, but it does not give information about the cause. So these proteins may reveal the presence of subcolinical disease and become a strong prognosis marker. Recently, there is an intense interest for their application as control markers
for treating diseases such as leismania, ehrlichia and a number of neoplasms.

Clinical application of acute phase proteins in veterinary action for companion animals is not widely used. The main reasons are practical limits concerning their special biological features and the analysis methods used. In addition, recent studies support that the assessment of all acute phase proteins and not of a single one of them leads to more acute results and even to the diagnosis of a specific disease.

in the near future, it is supported that acute phase proteins must be included as biological markers for infections and inflammatory situations in every routine examination.

Their name originates from the acute phase response of an organism to a harmfut event, which might cause inflammatory response. The aim of acute phase response is the restoration of homeostasis as soon as possible.This is achieved by the isolation and destruction of the infectious organism, the removal of harmful substances and the triggering of restoration mechanisms. 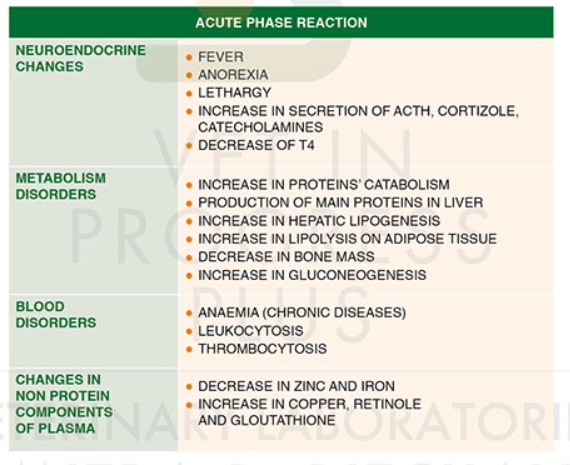 In general, acute phase reaction, which includes a great number of changes both in local and systemic level, takes place immediately after the entry of the stimulus and it lasts just for a few days. If the cause is not treated, the systematic response might last longer and become a chronic situation. In these cases, acute phase reaction continues resulting in further tissue damage. In other words, acute phase reaction and consequently the APPS that take part in this phase are considered a major part of the initial defence system. Thus, this phase is responsible for patients’ survival in the crucial initial phases and leads to innate immunity.

One of the most interesting changes is the change in plasma proteins concentration, which are called Acute Phase Proteins (APPs).C-reaction protein was described about 50 years ago in humans. Nowadays, C reaction protein is included in every biochemical profile providing significant diagnostic data concerning the disease and its prognosis and response to treatment.
Recently about 40 proteins have been recognised as APPS in animals. They are grouped either as positive APPS if
there is an increase in their concentration during the reaction or as negative APPS if their concentration decreases
at least 25%. Why negative? Up to now, there is no confirmed point of view about negatives’ APPs role in humans and animals.
They are considered as direct source of aminoacids for positive APPS synthesis, which are the most important proteins for organisms’
defence. Another classification concerns their production rate and consequently their changes in concentration which vary
according to the animals species. They are classified as major, moderate and minor. In major APPS, the increase is up to 100 times higher than normal value, while in the moderate ones from 2 up to 10 times higher. Especially in dogs, the rapid production and detection of CRP in blood after the triggering event, as well as its rapid removal from the patient, enables itself as a valuable marker of clinical condition of the animal during sampling.

COMPARISON WITH OTHER INFLAMMATORY MARKERS

• APPS have better diagnostic sensitivity. They increase even in cases that the total number of white blood cells or the leukocyte type does not reveal significant changes Furthermore, APPS have diagnostic value in cases in which bone marrow cannot respond to an inflammatory agent e.g. myelosuppression or leukemia

• Greater stability. Analysis can take place in serum which was stored at 0 o C.

• They reveal faster response from white blood cells especially in infections. This does not happen in post-surgery cases where the response of bone marrow is expected.

• Despite the difficulties concerning their detection methods, cytokines are declined by blood circulation within few hours while APPS remain detectable for at least 48 hours.

• Finally, many authors report that CRP measurement in various collections is an important factor of differentiation
between effusion and exudate.