Previously, diagnosis was mostly based on immunological tests and smears from lymphnodes and bone marrow. But during the 90s the use of other diagnostic methods such as PCR, improved rapidly researcher’s ability to study leismanionis in humans and dogs. Moreover, during the last decade innovative biomolecular techniques promoted further the use of new laboratory methods and technologies. Gradually, real-time PCR replaced compatible (qualitative) and nested PCR as the most sensitive and accurate method.

1. The infection in endemic areas is wide but not all the infected animals have clinical signs. There are animals with
clinical signs of different intensity in a short time. It is believed that they have not developed effective cell immunity though they have strong but insufficient humoral immunity. There are also animals asymptomatic for many years or throughout their lives. However, a change in their health condition, the administration of immunosuppressive medicine or an immunosuppressive disease, could lead to the activation of a latent infection resulting in the development of clinical signs.

2. The infection is rapidly transmitted within the dog population especially in ideal environmental conditions.

In a research held in a rural area of Naples in Italy, a group of 43 leismania negative Beagle dogs after 3 years was by 97.3 % positive in qPCR (bone marrow) and 75.7% of those were positive by IFAT. 19 dogs developed clinical signs 3 to 14 months after all the laboratory tests were positive. The most reliable diagnostic procedure is the DNA isolation of the pathogen in blood and tissues and the detection of specific antibodies in serum. In addition, real time PCR (qPCR) is a quantitative method that detects and quantifies the pathogen in animal tissues. 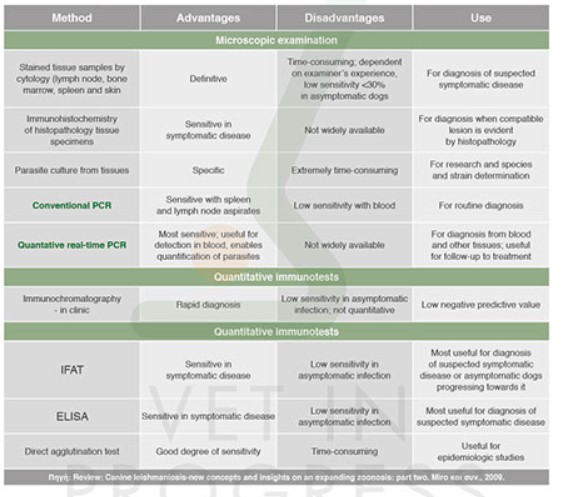 Laboratory methods are variable and each one of them has its advantage, its shortcomings and its recommendations.

For instance, the isolation and culture of the parasite from tissues is extremely time consuming and has lower sensitivity than real-time PCR and serological methods. The microscopic examination of stained smears of tissues such as skin, spleen, bone marrow and lymphnodes is a specific and sensitive method for the verification of disease, however its sensitivity is <30% in asymptomatic animals.

With the introduction of real-time PCR as a diagnostic tool, a major challenge for researchers has been to use it to better characterize and understand the parasite / host relationship, which would make use of the method in terms of its prognostic value.

In research held in the University of Barcelona 710 dogs were tested in an endemic area. The research lasted 3 years. 40% of them had clinical signs compatible of leismaniosis. 36,3% of all dogs were positive by serology and real time PCR, but only 17.9% had clinical signs. The results are listed below: 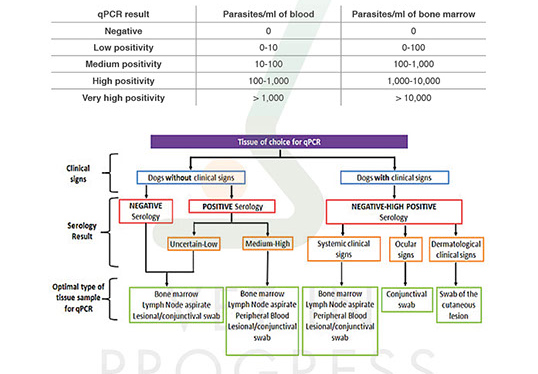 Because of the variable tropism of the parasite in different tissues, it is important for the veterinarian to choose the proper one.

In endemic regions, although the number of dogs positive to the parasite is great, a lower percentage of those will finally develop clinical signs. The titre in serological tests remains high for a long time before the antibodies decrease. On the other hand, dogs remain seronegative for variable time after the infection. Studies prove that seropositivity is revealed within 1 to 22 months after natural infection, while in an experimental infection it is revealed within 1 to 6 months.
Detection and quantification of parasitic load by real-time PCR is a valuable tool for parasite diagnosis especially in cases of low titre or in cases that cell immunity has been suppressed. Its prognostic value is obvious from the fact that dogs with medium, high or very high parasitic load show or will finally display clinical signs. In addition, the use of this technique for the development of new drugs and vaccines confirms its high prognostic value. Testing of animal’s parasitic load is recommended a month after the end of the treatment protocol, More particularly, real-time PCR is an effective tool for monitoring the response to the treatment especially in cases that it must be repeated and also for detection of early relapses.

Laboratories:
Vet in Progress Plus
Service:
Molecular Diagnostics
Category:
Real Time PCR is a diagnostic tool of control and prognosis of dog leismaniosis